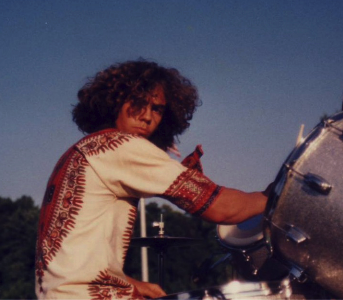 Drummers Benefit from Playing in a Band

One of the best ways to improve as a drum set player is to play drums in a band. Most large cities have websites for bands seeking musicians. To find bands seeking drummers in Sheboygan, try Bandmix.

Creating Your Own Drum Parts

Developing the ability to create your own style of drum parts on-the-fly is essential for a modern drummer. Drumming is made up of key elements: coordinations, rhythms, techniques, and styles. Master and accumulate a variety of these elements so that you can use them in various amalgamations as needed to suit the situation at hand.

This is my primary piece of advice for developing your own style. If you are interested in playing in a band someday, my advice is: do it now. I’ll explain why I think this is important and a great way to improve.

Being in original bands was the single greatest development tool for me as a drummer. Nothing else could have been so effective in helping me find my own style and establish my confidence in creating my own drum parts.

It happened without even realizing it. I was just playing the drum parts I felt the songs needed. Not always instantaneously. There’s a certain amount of tweaking when the song is new, but before long, you settle into the parts that work.

Years later I was able to look back and realize what a leap forward playing in bands gave me. Knowing key elements made it possible, but it’s amazing how being in that first band gave me a command over making my own drum parts.

Find a Band Looking for a Drummer

It doesn’t matter how good the band is. If they have songs and can play them start to finish, they’re good enough. In an original band, at least one of the members should be a natural song-writer. She needs to write guitar riffs or songs prolifically. Without such a member, the band won’t have a supply of songs to learn and will dissolve.

If the other band members are better than you, you’ll benefit from their musical maturity. If you’re better than them, it’s a serious confidence booster, and a great stepping stone to your next band.

How to Find the Right Band… Let Them Find You

Find bands that want to audition drummers. They’ll either have you prepare for the audition or just see what you can do when you show up. You want an audition so the band can decide if you are what they want. If you’re not what they’re looking for (or not good enough), they won’t offer you the position. If they do offer you the position, it means they like you and either think you’re good enough or are willing to help you get there.

Tip: Don’t worry about not being good enough. Worst case is they find a replacement and you look for another band. If you’re nice, work hard, and are honest with them, they’re not going to defame you if it doesn’t work out.

I remember the first several practices with my first band. My forearms got so fatigued I could barely keep up, or keep playing. If I had been practicing on my own, I would have stopped for a break. Before joining the band, I had spent a lot of time practicing, but I never pushed myself to play the fast cymbal rhythms for so long. That’s some serious muscle-building.

Key: Practice with the band weekly.
A key to achieving your goal by playing in a band is the rigorous practice schedule bands have. By rigorous I mean once a week for 2 hours, every week.

How to Know You’re Ready

You’ll find that most guitar riffs aren’t that different from other guitar riffs you’ve heard. When you hear them, you’ll naturally have ideas of drum parts that will fit. Sometimes the beat will be obvious, other times it will require some experimentation. It’s normal, when a band-member introduces a new song, for the band to try different things and see what fits. This is perfect for developing your own style.

After 1 year of snare drum lessons, I got a drum set. One year later, I joined my first band.

How to Prepare to Audition and Be In a Band

You can prepare by learning a bunch of your favorite songs. That’s huge. However, those are songs you already know. Auditioning and playing for an original band means you’ll have to create drum parts for songs you’ve never heard before.

Jamming with a friend is great. Another great tool is called drum play-alongs: songs without drums designed for drummers to play along with. You can find a bunch of free ones on Youtube. Just find some that appeal to you and have at it.

Play with a metronome. The better you are at playing with a click, the better you’ll be able to keep a steady beat with the band. Practice with a click track whenever possible and you’ll soon master the skill.

I’ve been teaching drums for 23 years. Each student is different, so find a drum teacher and follow advice that appeals to you. Feel free to ask any questions, big or small, through Sheboygan Drums’ contact.